They went on stage. Long, loud, clouds of chords, soft swelling guitar, cymbal-rolls, thick keyboard chords, bass rumbling, the clouds building, denser, louder, the intensity growing painfully patiently, finally releasing in a beautiful haunting wailing theme... and then the song... a bright almost ethereal voice ”With a touch of loneliness, bitterness, we watch all the values sipper out of our hands....” the music moves forward, taking me along on a vast journey, a journey of hope, despair, dreams, wishes, a story about civilisations, corrupt leaders... I still have one frase as a hall-mark ”The higher they climb, the holders of power, the more you should distrust them: for the biggest crooks _always_ the highest”. Complex, yet logical, the harmonies moved, building, releasing, intricate passages, long wonderful solos, not to brag, but to enhance, specify, explain. The Taurus bass boomed lower than anything I had heard. The guitar soared to places I could only dream of. The drums pounded, danced, sang, hammered. The organ, piano, synths covered colours I barely knew existed. The voice touched the clouds. The music touched my heart and my mind. This was truly symphonic music. This was music that made me grow, both spiritually, intellectually and musically. This was a goal for me as a young budding composer to aspire to. This was an experience for anyone to hold in their memories for years to come.

Now, over thirty years later I have gathered other inspirations, but still that first meeting with Kaipa’s music stands out as a landmark in my musical and emotional life.

The true story containing well known facts and fragments found in the labyrinths of oblivion.

KAIPA was the leading Scandinavian progressive band in the 70's and recorded five albums during the years 1975 - 1982. Taking basic inspiration from the Swedish folk music they performed an elaborate symphonic music aiming at the expression of emotions and feelings in an aesthetic of formal beauty and melodic perfection.

Kaipa, however, intended to differentiate themselves from past and present styles, producing a personal and original music taking its inspiration from the past yet looking to the future. 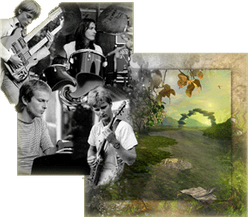 KAIPA – The History Part 2 – The rebirth

In year 2000 Hans Lundin and Roine Stolt decided to bring their forces together again and reform KAIPA.

The new Kaipa album is filled with all new material. All the colours, shapes and vibes of the unique Kaipa-music from the 70’s are present, but with enough new grooves and textures to be attractive to both die hard fans and the uninitiated alike. This is definitely progressive rock for the new millennium - rocking, and raving with blistering guitars and distorted synths, paving the way for all those glorious Mellotrons and Hammond organs that have been and are still the trademarks of 70’s progressive rock.

Although Hans and Roine had been musically parted for more than twenty years, this most recent effort is proof the chemistry is still alive and well. It’s as if the band and music were teleported directly from 1976. It doesn’t take long to realize that all the right pieces are in place again. As was the case during their heyday, Kaipa is a force once again with Hans and Roine at the helm.

Together with a handful of Swedens top musicians in the prog and fusion genre, they excel with this most recent offering of classic vocal lines, textured keyboard and guitar wizardry. It also features Patrik Lundstöm (of Ritual) on lead vocals and Morgan Ågren (Zappa, Mats & Morgan) pounding the drums in his own unique frenzied style - a true master class experience in percussion. New bass phenomenon Jonas Reingold, (The FlowerKings) adds his slightly distorted, high energy basslines to this fusion drive, and makes for a completely solid rhythm section. They fire off a cascade of prog-folk-symph- rock that has as many similarities to the previous Kaipa records as it has differences.