Reviews: Children Of The Sounds 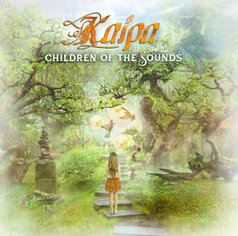 After more than four decades of creating music, Kaipa is still one of the leading names in the Progressive Rock universe, and with “Children of the Sounds” they have proved this statement once again. 5 long musical pieces of art that embrace beauty, poetry and romanticism with an artistic brilliance and complexity one can only find in very few releases nowadays. Kaipa might be a progniverse titan, but one that feels younger with every new musical release.

“Children of the Sounds” is an album that floats and make you float in a cloud of positiveness and beauty only experience and the inspiration drawn from the exuberant swedish nature could bring. A real gem in this genre, and in my opinion one album I’ll be coming back to very often. Such a complete album full of harmonious melodies, energy and good vibe is the kind of uplifting push I might need when my mood is not at its best. Thank you KAIPA for creating this beautiful music!

Swedish sextet Kaipa is one of the most immediately enjoyable bands in the genre. Indeed, their modern blend of melodic cheerfulness, earthly textures, and invigorating, downright fun complexity makes their music remarkably luminous, catchy, and heartfelt. Naturally, the group’s 13th studio LP, Children of the Sounds, upholds such excellence without fail. Arguably even more touching, unforgettable, and fluid than its wonderful predecessor, 2014’s Sattyg, the record is yet another radiant sequence as only Kaipa could provide.

Like its precursors, Children of the Sounds is a perfect prog rock channeling of Gaia. Sure, each player excels as both an individual master and a crucial cog in a cumulative wheel, but that could also be said for countless other acts. What truly makes Kaipa stand out here, as always, is the ways in which they create celebratory sonic worlds filled with a childlike sense of wonder, hope, and possibility. Rather than aim for soulless virtuosity (as a fair amount of their peers do), they make each technical moment serve the central goal of enveloping the listener in an aural fairytale of colorful, life-affirming compositions.

Recommendation: If you love prog, you will love this

Have you ever wondered what Relayer era Yes would sound like being fronted by Freddie Mercury? Well, the answer is the 13th release from this legendary Swedish prog band. This is truly classic prog at its finest, without a mistake or bad direction, either musically or lyrically. The “cheese” factor can be high in moments of this conceptual musical journey, but for true prog fans it will fit like your favorite pair of sneakers, both giving a sense of security and familiarity, but also exhilarating with the potential of the what the journey ahead may bring. Coming in at 59 minutes with only five songs, this is a true, traditional prog opus.

Founded in 1973, and reformed in 2002, Kaipa has been a renowned force in the prog music scene, being more a supergroup than a traditional band. The veteran status and performing ability definitely shines through on this excellently produced album. Greatly recognized in their home country as one of prog music’s greatest forerunners, they are seriously under appreciated here in the States. Hopefully more will open their eyes and ears to this mainstay and check out their extensive back catalog. Rating: 5/5

The passing of time and changing personnel have done nothing to take the wind out of the sails of Swedish veterans Kaipa. Keyboardist Hans Lundin is the only member left from their 70s incarnation, but they’re not afraid of exploring different sides of prog’s heritage, even as their sound remains rooted in the genre’s golden era. Where 2012’s Vittjar leaned towards their folk proclivities, both 2014’s Sattyg and now Children Of The Sounds drink heavily from the cup of Yes, with classical allusions, epic songs – the shortest one here is almost seven minutes, the longest over 17 – and marvellously detailed compositions. Perhaps the shift away from pastoral fields reflects the influence of Per Nilsson, whose guitar work throughout is fluid, articulate and always melodic. When vocalists Patrik Lundström and Aleena Gibson blend their voices in harmony on the title track, you could be forgiven for thinking it’s Jon Anderson. On The Edge Of New Horizons sees Karmakanic drummer Morgan Ågren dusting off his best Bill Bruford licks with his jazzy cymbal work, and the whole album has an upbeat energy that suggests it was recorded with sunshine streaming through the studio windows. This is proper prog and no mistake.

"A well-crafted and creative album...full of long instrumental sections, superbly played by all involved. A bright album full of positive energy that creates a feel good factor."

Kaipa’s music has always felt like a musical stroll through Swedish forests and countryside, often full of light, bright and positive feelings, invoking images of their homeland. It is difficult to not be draw into their music, with its combination of atmospheric sounds and beautiful melodies. Quality bass and drums (as you would expect from Jonas Reingold and Morgan Ågren) confidently support Hans’ excellent keyboards and lovely guitar runs from Nilsson. The use of both female and male vocalists adds an extra dimension to the songs; Aleena Gibson’s vocals are different but beguiling in equal measure, which certainly works within and for the music. Indeed both she and Patrik Lundström give excellent performances.

The journey it takes you on is like a magic carpet ride over a historical city at sunset; the brilliant colors of the sky colliding into one another and creating a canvas transcendence. What is perhaps most impressive is the flawless movement the band displays through various passages of sound.... This is exactly what engaging music can do. It pulls you into their world like passing through a magic portal to a time and a place that exists only in myth and legend. When you arrive, there is no pain, no trouble, and no end. Everyone and everything is precisely what you want it to be, and you are forever linked with the present, never to return. “Children of the Sounds” is surely one of the most ambitious efforts that I have heard this year, but when a band can meet these lofty standards of meaning and purpose, it is truly a special thing to hear. Almost perfect 9/10

I can only celebrate progressive rock that is written, produced and performed with this much talent and gusto. There are moments on this album that reminded me of why I love progressive rock, and I can't ask for much more than that. Children Of The Sound is an extremely entertaining recording and another fine addition to the Kaipa discography.

Most of the tracks on this new album are epic in form, and are showcases for the wonderful keyboard work of Lundin. This is progressive rock in its most traditional, symphonic sense, and the expanded nature of the music provides each band member an ample opportunity to shine.

It goes without saying that there is an unfeasible amount of complex rhythms and intricate musicianship on display because at the end of the day Kaipa are a progressive rock band, but they have crafted their own sound and identity in a crowded genre. The album oozes technical guitar, bass and keyboard lines – so many that the analytical ear will be kept busy for weeks, but there are also some nice unexpected touches like the aforementioned melodic vocals and some really fabulous violin passages. This is such an uplifting, optimistic album both lyrically and musically, and anyone with an enjoyment of progressive rock/metal will find plenty to enjoy about this album by such a respected progressive band.

Everything I like about the Kaipa sound is amply on display in these five mostly long compositions that seamlessly weave different musical segments together into a complete whole. It’s classic symphonic prog in every way: big and bold dramatic compositions that are constantly shifting in time, tempo and mood that ebbs and flows between contrasting feels. When not soloing lush keyboard orchestration fills out the background creating grand and majestic ascending swells of music that are punctuated by great keyboard and guitar interplay. Long introductions give way to warm vocals which then make way for plenty of instrumental interludes. Unlike many modern bands, here the keyboards stand on equal footing with the guitar creating as many or perhaps more lead lines. But then these are, as I say long songs so there’s lots of opportunity for not only keyboards to be in the spotlight but everyone including bass and drums. These are compositions that allow for each instrument to contribute to the sound as well as share the lead. Fans of any earlier music from Kaipa will find plenty to appreciate and enjoy with Children of the Sounds but for those of you who’ve never heard the band, this would be an excellent place to start that adventure. Great stuff and highly recommended for fans of symphonic prog. 4/5

There's little to quibble about when it comes to a Kaipa album. I like everything about the band and their music. Their neo-classical progressive rock never gets old for me. While some may say the Kaipa sound is retro or vintage, I'd say it continues to be vibrant and fresh for the present day. There's many things to enjoy about Kaipa's music and Children Of The Sounds.

My favorite element in a Kaipa arrangement is the frequent and abundant guitar solos found in most every song. Per Nilsson must make other guitarists jealous. He gets so much room to stretch and soar. It's scary good stuff. Finally, all these things are wrapped up in lightly technical and intriguing arrangements that keep you engaged and entertained. Kaipa's Children Of The Sounds is the perfect storm of classic melodic progressive rock, highly enjoyable and quite recommended. 5/5

Full of complexity and joy, Kaipa weave their magic and Nilsson is a revelation throughout, providing some exhilarating moments, which capture the delights of a spring Scandinavian landscape. An album which offers almost an hour of pure prog pleasure.

There’ s no denying it; I am pretty infatuated with Kaipa’s latest album.

The melodies employed here make one’s attraction to the five compositions on offer immediate while the technical abilities of the sextet, and the way they are utilized, are more than capable of keeping the listener hooked throughout.

What we have here is an album which manages to sound fresh and relevant while staying true to the spirit of the early 70s and that is quite a mean feat. Invest without fear! 4,5/5

You don’t really need to listen long to realise that this is another brilliant effort from these guys – an album that will not disappoint, the fans will recognise the band but still find this a fresh and exciting new effort. An album that moves Kaipa further along their musical path of excellence. They have managed to put together five really great tracks that takes you on a very exciting musical adventure, an adventure that will take you wherever your mind decides to follow the music. It is also an album with a positive outlook, something that is very much needed in a world where many seem to see the worst in every situation.