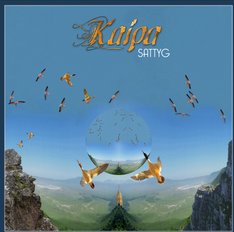 Never the ones to shy away from a challenge, the members of Kaipa introduce their latest album with the epic-sounding “A Map Of Your Secret World” – what can only be described as fifteen minutes of pure musical joy!

There is, however, a wealth of beautiful and cleverly hidden themes, mainly offered by the band’s dead-tight rhythm section, that only those of you willing to spend time on really listening to “Sattyg” will really profit from; these themes gradually reveal themselves to you every time you choose to revisit this beautiful album.

It takes a very talented and pretty harmonious group of musicians in order to create an album as thematically challenging and approachable as “Sattyg”.

There have been countless occasions, while listening to the seven compositions on offer, when I found myself lost in Jonas Reingold’s soulful bass themes, stunned by the flamboyant nature of Nilsson and Lundin’s melodies and/or captivated by the vocal contribution of both Lundström and Gibson, all of which convinced me that the album is one that deserves every praise possible.

Another great quality release by a band that’s clearly at the top of its game. 4.5/5

Sattyg is simply wonderful throughout, a fascinating addition to the now extensive Kaipa catalogue. They really don’t put a foot wrong here in an exhilarating display of invention and musical celebration.

Kaipa hit their goal with aplomb here, Sattyg tweaks the emotions one minute, soars to the skies the next whilst still managing to capture more earthy qualities. The musicianship is stellar as usual whether the band are flying or pinning down a delicate section punctuated by whistle, harpsichord or Elin Rubinsztein’s violin, the dextrous instrumental outbursts exemplifying the work of latter day Kaipa whilst the themes are stately and organic. A key point is the ability to flip from acoustic instrumentation to full-blown electric at the drop of a hat whilst integrating all the elements together perfectly. There’s also plenty to enjoy going on in the background and the end result is supremely satisfying.

The ability to blend so many disparate elements into a cohesive whole is the real success story and over the run of albums in the new millenium Lundin and Kaipa have established a sound that is all their own with Sattyg probably the most satisfying album the band have yet produced. It’s a complete joy from start to finish and anyone who has been taken in by the spell cast by this band previously are sure to love it.

The landscape and traditions of Scandinavia are etched into the music of Kaipa and Sattyg has to be the most complete vision of this to date; a real fusion of styles put together with care and attention to detail, the requirements of the music being the focus of all involved.

Songs of nature and the human condition are clearly a huge inspiration to Hans Lundin who wrote all of the songs. Kaipa’s affinity with natural world is compelling, evidenced by the huge influence from Swedish folk as well as traditional progressive rock and other forms. Lundin should be commended for his skill in putting all this together, the band negotiating his labyrinthine melody lines with ease whilst able to display their individual personalities through the beauty of Lundin’s mix and production

With a cry of joy from Aleena Gibson, "Yah!", Kaipa has returned from the forests of Sweden to provide their unique and beautiful sound to the realm of progressive rock. Their latest album Sattyg, has some familiar chord romps from their last two albums, but this new album takes us to new realms of wonder.

Close your eyes and dream again, as you listen to some of the best music Kaipa has performed. If you are a fan of the band this is easy, you will want this album as part of your collection. If not, don't miss one of the best albums of the year. 4.5/5

This in simply one the best and most complete Swedish retro prog rock albums ever released. Their blend of folk, prog and fusion really comes together on this album, and they show the prog world how a prog rock album with strong Swedish roots is put together! "Sattyg" combines everything their three previous albums have lead up to, and takes their music to new levels and into new territories, and that without sacrificing their trademark sound.

This is a mandatory purchase for all prog rock fans, and especially fans of the mighty Swedish scene. Brilliant! 93/100

Having a massive legacy behind them, Kaipa enters into this one without hesitation, delivering another flawlessly executed album of their unique brand of progressive folk rock. The basics of the album are true to form for Kaipa, complex and soaring melodies and stunning dual vocal work, all laced over a blissfully positive message and vibe, with the noticeable difference being a base much more grounded in the folk aspects. As with Vittjar, this album as well ignores the rules and simply plays and has fun.

With as much history and skill that is present here, it’s of no surprise that this album delivers. Though there are no shockingly new twists from Kaipa, the things that have made them such a long term success in the prog world are again done in a fantastic fashion. 4/5

Seemingly coming from nowhere, Sweden’s Kaipa unleash the most consistently interesting/awesome Prog Rock album since Metropolis Part II with Sattyg; something truly special in the wonderful world of Wank.   A near-perfect synthesis of Prog’s new and old schools, of virtuosity and tastefulness, and of competing influences, Sattyg hits like a steamroller and almost reeks of redemption – a bunch of undervalued veteran players showing the new guys how it’s done.   Sattyg is pure gold.

Their sense of wonder through musicianship really shine out, and you can hear it in every note. They work together to present a progressive masterpiece. As playful as these songs are, time seems to disappear when listening to Sattyg.

This is a harmonic and melodic tour de force, make no mistake, and one gets the impression the sextet have pushed each other creatively to new heights. Opener ‘A Map To Your Secret World’ encapsulates everything that’s great about this record: namely compositions that never sacrifice the tune in spite of their complexity; clever keyboard and guitar arrangements; and unmistakable medieval overtones. Clocking in at 15 minutes in length, it’s the longest of the album’s sprawling tracks, crammed full of ideas and hooks and lent a subtle air of mystery by alluring lyrics neither too explicit nor too vague in their meaning.

Kaipa are not for everyone, but if the idea of medieval progressive rock appeals, you won’t find a finer or more original take on the sub-genre than that presented here.

One of Progressive music’s underrated gems have added another jewel to their underplayed legacy.

An aural swirl that indulges the senses for nigh on 70 minutes across 7 reflective, meditative and eccentric musical passages, the sextet casually unfurl their folky and progressive indulgences, unhurried and unpressured, allowing each track to expand and develop as if in its’ own microcosm. 8/10

Essentially, Sattyg is fundamental, creative, and entertaining classic melodic progressive rock from a band that could not do anything less. Recommended. 4,5/5

Rarely have I heard this formula sound so expansive, energetic, and imaginative, proving once again that the pioneering acts still do it the best.

WOW!!! I was amazed when I fist played this album (start to finish) because it was so much more than even I was expecting! The more complex “Proggy” arrangements are very like classic YES, if fact this is how I’d imagine many fans thought the new YES album should have sounded!! There are strong elements of BRAND X and other similar sounding acts in the fusion/jazz-rock passages - and the guitar work… well phew, that really is something else - This guy really knows how to make it talk! While the guitar work does tend to take most of the leads and solos, with the keyboards left to provide a solid foundation for the fretwork, but they too get their moments to shine when the need arises.

The male / female vocals are also first rate and often in the same place as Jon Anderson would be in YES music!

There are still a few little diverse “folky” tuneful breaks that provide breathing space between the more intense, but equally melodic rock passages, but on the whole this album is Prog to make you rock and it’s full-on from start to finish, with each of the brilliantly composed seven tracks played with huge depths of skill and imagination.

The production is superb, but there’s loads to take in, so while one play was enough to deliver the “WOW” factor for me, I just know there is so much more to explore and discover in the many future airings I’m going to give this incredible record! Definitely one of the best this year!

Strong symphonic elements sit alongside dreamlike and playful Scandinavian folk and medieval influences, topped off by the terrific and instantly recognisable vocal talents of Patrik Lundström and Aleena Gibson. This combination works well on long album opener A Map Of Your Secret World – a mystical love duet in frenetic multi-layered sections tempered by excursions into gentler territory. It’s strong too on A Sky Full of Painters, with its hints of psychedelia giving way to upbeat jazzy grooves and some tasty playing from guitarist Per Nilsson. Tweeness can creep in, most notably on the hornpipe/jig of the title track, but founder member and main composer Hans Lundin keeps the prog flowing. With powerful and lush tracks like Without Time – Beyond Time and the teasing, building Unique When We Fall, Kaipa create an exquisitely surreal musical landscape.

Filled with emotion and lingering melodic waves, this 7 song album is meant for those unique individuals who think outside the box, featuring odd time signatures and opposing sounds ‘Sattyg’ is for those who seek something very specific and quirky. This is music for a long unpredictable expedition, a life changing event, a story, a journey.

If you’re willing to expand your musical knowledge and absorb yourself into something off the beaten path then Kaipa’s ‘Sattyg’ is yours to discover. 7/10

Kaipa kick things off with the monstrous 15-minute epic A Map Of Your Secret World and if you survive that chunk of multi-instrumental magic then negotiating the remainder of Sattyg is a breeze.

Bizarre yet brilliant, the fusion of a steampunk-style rhythm with some truly stunning lead guitar work makes for 13 minutes of pure progressive madness.Sattyg is sumptuous stuff. 8/10

Kaipa remains unmistakably Kaipa and the difference-making factor is the pleasant dose of folk which is woven into the sound.  Kaipa delivers with 'Sattyg' once again a beautiful album that has plenty to offer for all proggers, including three 'epics', you know, them songs than last for twelve minutes or more. 85/100

If fantasy and wonder are things you look for in music, look no further than “Sattyg,” the twelfth release by Swedish group KAIPA.

As a guitarist, I couldn’t help but latch on to the emotive lead playing of Per Nilsson, who absolutely slays on every song. It’s not even that he plays the craziest material technique-wise, though he certainly proves he is capable on tracks like “A Map Of Your Secret World” and the beautiful “A Sky Full Of Painters.” Rather, it’s more the sheer variety and consistent quality of his melodic leads, which extend for minutes on end while maintaining a high level of audible enthusiasm, flooding the album with vibrant sonic colors. 8/10

The amount of musical talent within Kaipa is mind-boggling. “Sattyg” should be a prog rock fans dream – particularly if you enjoy 70’s classic progressive bands like Pink Floyd, Yes and early Genesis. 79/100