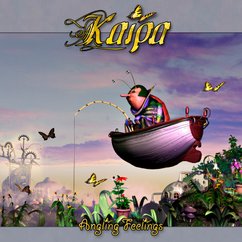 The album is a joyful and spiritual experience, packed with everything from poetic beauty to mindboggling instrumental extravaganza. It offers some of the grooviest and most successful 7/8 time signatures ever made in "The Fleeting Existence Of Time" and breathtaking beauty in "Path Of Humbleness," which must be among the most beautiful pieces of music ever written.

Angling Feelings is Kaipa at their best and probably their best effort this decade. Sound, production, melody, harmony, groove, and everything you could possibly measure music by is simply spot on. It is a gift and a magic hug to all fans of music with a Progressive approach. 10/10

Kaipa are a 6 piece "progressive, fusion, folk, rock" band from Sweden who really know what they are doing. Their latest album "Angling Feelings" is a very tight, modern sounding masterpiece with all the elements of light, shade, complexity and melody more than apparent and moreover, in abundance.The title track hits you like a brick on the head, with very pacey and complex 5/4 timing you aren't really sure what's happening next. Track 2 "The Glorious Silence Within" is a beautiful song with a fantastic build up, this leads into "The Fleeting Existence of Time" which is an album in itself. Wow!

Track 4 is fab and track 5 "Liquid Holes in the Sky" has a wonderful string intro and a superb guitar solo to boot. Back uptempo with "Solitary Pathway" then track 7, "Broken Chords" with it's unique sequencer rhythm and chord stucture. This one is the one for me. Fab guitar solo too. Track 8 "Path of Humbleness" is a kind of folk meets funk. Interesting this with some top drumming and a great vocal delivery. The last two songs round of a fascinating album.Superb production, Superb music. Superb band and singers. My only complaint is that track 5 and 10 end a bit abruptly like the engineer ran out of tape or something, but hey, that's prog!

Guitarist Per Nilsson gives a brilliant display of virtuority throughout whilst Hans Lundin's keyboard playing gives a multi-textural feeling which brings the songs to life. Singers Aleena Gibson and Patrick Lundstrom do a stirling job throught the album with stark punchy vocal styles which compliment the energy of the band perfectly. Drummer Morgan Agren and bassist Jonas Reingold really play to the highest level to keep the energy in the music. All in all a faultless performance topped with some lovely whistles and recorders from Fredrik Lindqvist.

With Angling Feelings, however, Lundin and band have expanded Kaipa's sound - there are many passages that sound downright jazzy, mostly those featuring Aleena Gibson's seductive vocals. Patrik Lundstrom (Ritual) provides the vocals for most of the material here, his warm voice and soaring vocals playing well off of Gibson's breathless phrasing. There are elements of traditional Swedish folk interlaced within the songs, as well as hints of world music influences. "Broken Chords," for instance, builds upon a simple, island-influenced rhythm with shimmering guitar and keyboards and Lundstrom's strident vocals. "The Glorious Silence Within" dances out of your speakers like a sprite at a Renaissance faire, the song's intricate weaving of delicate instrumentation matched by an upbeat tempo and performance, with delightful vocal harmonies building a joyful chorus.

"Path Of Humbleness" begins with an ethereal, far-away sounding intro leading into Gibson's haunting vocals and a quiet cloud of instrumentation before filling out with an unique mix of Celtic traditionalism and soulful keyboard riffing. The title cut kicks off with a Wakemanesque keyboard wash before descending into a maddening, chaotic clash of instrumentation and vocals that has its roots in the '70s-era sound of King Crimson but its feet firmly in the firmament of contemporary prog expectations. The song provides Nilsson with an excellent showcase, his nimble fretwork and trembling tone adding a vital new aspect to Kaipa's sound, different from, but just as valuable as Stolt's previous contributions.

Whether you're a fan of classic prog-rockers like Yes and Genesis or modern generation prog bands like the Flower Kings or Pallas, you'll find a lot to like about Kaipa. If you're a new fan recently discovering the joys of the prog genre, Kaipa's Angling Feelings is a good place to begin your journey. With superb musicianship, charming vocal harmonies and imaginative song craftwork, Kaipa has successfully incorporated sounds both old and new, building a bridge between the '70s and the '00s. Enchanting and electrifying, Angling Feelings represents both the overwhelming potential and the very best aspects of contemporary progressive rock.

The Fleeting Existence Of Time is possibly the bands finest twelve and half minutes ever. The first section features Aleena's stirring vocal melody offset with stunning interplay between rippling guitar and Lundin's gritty sounding Hammond. At the half way mark it develops into a jazzier affair with excellent ensemble playing delivered with rapid fire precision.

It's fair to say that this release marks a huge leap forward for Kaipa. Whilst the richly symphonic Keyholder improved upon Notes From The Past in every way, Mindrevolutions in my opinion progressed hardly from its predecessor. Angling Feelings on the other hand sees the band redefining their style of melodic progressive rock and taking a few risks along the way. The influences are less obvious than before with the band sounding more cohesive and with more than the occasional moment of sheer musical brilliance. Lundström's characteristic vocals are normally an acquired taste but here they sit far more comfortably within the sonic soundstage. Vocal duties are also split more evenly this time round allowing Aleena to demonstrate her dynamic and passionate vocal skills to the full. The material is certainly some of the strongest ever from Lundin and the production is as clear as glass demonstrating that the absence of Stolt is not an issue. That's unless of course you miss the extra fifteen minutes of playing time that he would have almost certainly have added! Highly recommended and destined to be one of my top albums of 2007 for sure. 9/10

This is the ninth studio album of Kaipa, the fourth from their second period, starting in 2002 and the first without Roine Stolt from The Flower Kings, who initially started with this band. His replacement on the guitar is Per Nilsson, known from the metal band Scar Symmetry.

A new guitar player, a new wind in the Kaipa world, a new sound? Well it certainly makes a difference. Although all the ingredients from previous albums are still around, which were the jazzy parts, the progressive pieces, the complex instrumental moments, the folk influences and the melodic vocal parts; they are all performed in a more relaxed way. The jazzy escapades are shorter than before and don't get too far away from the melody. It was especially the latter which I didn't like for a hundred percent on the earlier works. It were always great albums, but those long improvised pieces kept me from playing the albums a lot. And this one will find the way to my CD player much easier.

Per Nilsson is a great guitar player. Without questioning the skills of Roine, I can say that Per gives the Kaipa music a whole new twist, with breathtaking guitar solos. It's a completely different world, away from the metal music, but he certainly knows his way around.The vocals are perfectly balanced between Aleena and Patrik. Patrik sings most of the tracks, with his known Ritual voice and his folky influenced melodies. Aleena takes the more melodic pieces. They have great complementary voice timbres which fit perfectly together.

I don't have to comment the works of Jonas Reingold (The Flower Kings, The Tangent) because everybody knows his skills. And on the drums, there's a master of percussion, Morgan Ågren. If you have played with Zappa, no one doubts your qualities. He's also known from Matts/Morgan and from touring with the Glen Hughes band.

The folk influences are emphasized by the guest appearance on several tracks by Frederik Lindqvist (Ritual), playing recorders and whistles. The new line-up takes this album to a higher level and makes it one of my favourite Kaipa CD's along with "Notes from the Past", which I always preferred. I wonder if they'll ever perform this on stage. Would be a dazzling experience! 9/10

Angling Feelings offers another intricate work by Hans Lundin & Co., where he and the band go beyond pushing the envelope in pursuing an alchemy of melodic endurance. 4/5

On this new outing we get Per Nilsson on electric guitars and thats not a bad trade at all!! Per, delivers some excellent guitaring (both solo and chord wise) on this album. In all, its a musical brilliant venture Kaipa has released this time (also), There are superb songs, there are great sound and arrangements and the delivery are, well just excellent! Lundin´s keyboards are as always supreme, ever present and joy for any keyboard freak. Not to mention the master bass lines of Jonas Reingold (ex- Flower Kings) with those basic and solid drums of Morgan Ågren, finally we have the pleasure of vocalist´s: Patrik Lundstrøm & Aleena Gibson (that distinct voice, giving me goosebumps now and then!) summing up, a totally great (to my ears) new album from these fabulous Swede´s.

Imagine hints of Flower kings (surprise surprise), folk-like theme´s, high powered progmusic, great ballads, breaks and time signatures a plenty, great soloing, beautiful voices. All done with superb vigour and talent!! So, almost 65 minutes of great progmusic, for you to get your eager proghands on!! Dont just sit there, go buy it!! Special mention to superb epic track: "The Fleeting Existence of Time" which holds all the aforementioned superlatives!! 5/6